Totally frustrating nonsense from the world of programming

This is the kind of thing that makes developing software take twice as long as it should.

So I run the function to test if a certain value is NULL (i.e. empty) and this is the error message I get:

"Data is Null. This method or property cannot be called on Null values."

Got that: the function to check if something is a Null value or not doesn't work if the value is Null, which you can't tell unless you run the function.

Email ThisBlogThis!Share to TwitterShare to FacebookShare to Pinterest
Labels: ASP.NET

Much respect to OBFBL webmaster and all-around awesome guy Kurt Morris for encouraging his colleagues to vote for our video in the Actober contest.

"Everyone Needs a Little Jeter" is one of five finalists in this week's Actober contest. Here's what you can do to support us, its creators

1. Go to http://www.actober.com/Vote.aspx . Here, you can view our video (as well as those of the other finalists, but why would you want to do a thing like that anyway?) Ours is the fourth video on the page.

2. Once you've watched the video, check the "Select" box next to it and then click the "Vote" button at the bottom of the page.

3. Repeat steps 1 and 2 many, many times, thereby expressing your profound appreciation for our artistic achievement (or, failing that, that time we lent you $20 / helped you with your 8th grade term paper / sucked venom out of your rattlesnake bite, etc...). As they say in Chicago, vote early and often!

4. If you genuinely enjoyed our little film, please forward this email to your family, friends, and co-workers (indeed, everyone you know -- we have no shame) and encourage them to vote for it too.

In addition to the vast reserves of good karma your vote will undoubtedly create, doing well in this contest will go a long way in helping us establish ourselves as a force to be reckoned with in the exciting world of Internet Video... or at least as "award-winning" makers of silly videos about baseball.

Email ThisBlogThis!Share to TwitterShare to FacebookShare to Pinterest
Labels: Actober

I'm really proud of this: 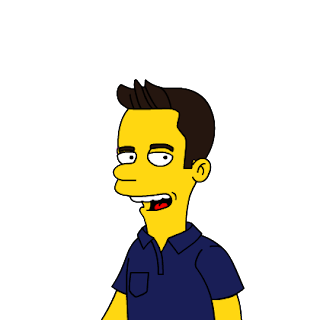 Email ThisBlogThis!Share to TwitterShare to FacebookShare to Pinterest
Labels: Simpsonize me

So I've been working on a website development project for a client. To test cross-browser functionality, I've been running a copy of Safari for Windows.

Now the interesting thing is when the website captures the browser identity when I connect to it with Safari, here's what it says:

Two things about this. First of all, browser identity shouldn't even include a reference to a platform or OS. Internet explorer reports "IE 7.0" Firefox reports "Firefox 2.0.0.6"). Secondly, it's not the right OS.

Safari for Windows reports that it is actually the "AppleMAC" Safari browser. And yes, I do know a separate part of the request header reports the actual operating system, but still... honest error by Apple or attempt to inflate statistics showing Macintosh/Safari for Mac's market share?

Scientists claim to have made particles move faster than the speed of light. The interpretation of their data is in dispute, but I'm already lined up to purchase the first commercially available warp drive.

From baseball to football

Well, it's official: I have been mathematically eliminated from OBFBL playoff contention. So end my 2007 Fantasy Baseball efforts. I'm still playing for pride (and hopefully to finish the season with an over .500 record).

Some random observations on my season:

So it's on to defending my championship title in Fantasy Football's highly competitive (and relative-heavy) Alspach All the Time league. It's something to look forward to in the realm of fantasy sports.... but a poor substitute for baseball.

More fun with online video contents. This one is for MLB's "Actober" contest, in which they ask you to reenact a classic post-season moment.

Here's our interpretation of Clemens vs. Piazza from the 2000 World Series.

Not too long ago, Alex Rodriguez was universally reviled by Yankee fans. Things change quickly when you're having one of the greatest individual seasons in the history of the sport. Having been there last Saturday to see ARod hit career home run number 500, I can honestly say that the outpouring from the fans was spontaneous, exuberant and genuine.

I didn't see Barry Bonds' record-breaking home run live last night, but based on the footage I've seen today, what a contrast. There was much excitement from the San Francisco fans, to be sure, but the sedate tone to the 11 minute break in the action that followed Bonds' touching home plate said a lot.

Hank Aaron's pre-recorded message struck the wrong note for me. It seemed so meticulously crafted -- so much care given to every word so as to avoid saying too much or too little. It seemed to me as less of genuine outpouring of excitement or respect on Aaron's part and more of an attempt to fulfill his obligation to posterity, lest his well-earned legacy of tremendous grace and class be tarnished.

Bonds' own remarks, too, seemed so by-the-book. I've heard commentators praising Bonds' reaction for being perfect -- the sort of thing you're supposed to respect regardless of your opinion of him. But that's the problem: it was just too perfect, too safe, too self-consciously trying to steer clear of the 800-pound gorilla in the room.

I just think about the reaction that an injury-free Ken Griffey would have received had he been the one to break Aaron's record. My sense is that it would be a lot like the one ARod got on Saturday, times a few thousand. In fact, ARod himself probably will experience that someday.

For me, the enduring image of number 756 will not be that of Bonds standing at home plate, extending his arms skyward, acknowledging his father. Instead, I will remember this photo of Bonds and Dave Roberts embracing as Roberts relieved him in the outfield later in the game. The gargantuan Bonds engulfs his average-sized teammate in an enormous bear hug, reminding us that something just doesn't seem right.

What a day to be at Yankee Stadium! ARod hit number 500. Cry Havoc! (helicopter that is)

So I just got one of these things as a thank-you gift and it's wicked cool. Highly recommended: