Last night was one of the most amazing experiences of my life. There we were at Yankee Stadium, watching the Yanks pitching getting lit up by the Tribe, feeling kind of defeated... when all of a sudden...

Everyone Needs a Little Jeter plays on the Yankee Stadium Jumbotron!

We had no idea that was coming.

Of course when you enter the Actober contest, you agree that Major League Baseball can use your video for promotional purposes... but we had no idea that our film would be played on the big screen at The Stadium in front of 55,000 people! And we never would have known about it either if it wasn't for the fact that Leigh and I just happened to be at the game that night.

I managed to take a couple of camera phone pictures of the screen, but you can't really make anything out: 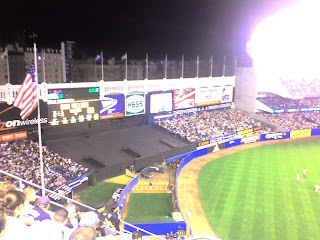 I'm particularly surprised since our video -- as proud of it as I am -- didn't even win in the fan voting for our weekly contest.

Thanks again to everyone who supported us by voting in the contest, and thanks to whoever it was at the Yankees and/or MLB who liked what they saw enough to give us such a tremendous vote of support and confidence!