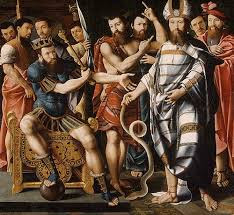 So Obama's spiritual adviser du jour has gone and said some new inflammatory things, this time about Senator Clinton.

It makes me think of the pharoh's magicians from Exodus who turn their staffs into snakes, only to have them be devoured by Aaron's staff. Those guys were spiritual advisors. Plus they could do magic. All these current guys can do is blast the world's easiest target.
Posted by Brian at 11:58 AM