Why I am concerned about Trump supporters

This is a post about why I am concerned about Trump supporters. Most of my recent political commentary and Facebook activism has been about analyzing and trying to oppose militant pro-Trump people. Why am I spending time doing this? Why do I think it's important? Why is it something I'm uniquely interested in? Here's why.

Second, a clarification of terms. By 'Trump supporter' I mean 'someone who is enthusiastic about the candidacy or Presidency of Donald Trump.' Not all Trump voters are Trump supporters: many voted for him un-enthusiastically or as the lesser of two evils. I'm talking about the people who actively embrace Trump and view him as being representative of them and their views. That still lumps a broad group of people together who obviously don't share a single, well-defined set of characteristics or views. This post is aiming to get at what I take to be the fundamental nature of Trump support as a movement an what it represents, and I think what I am about to describe captures that essential, even if it isn't literally true of every Trump supporter (or to the same degree).

Now, on to two important things you should know about me and my beliefs that ground this discussion:

First of all, I think two of the major cultural achievements of modern western society -- and of America in particular -- are the recognition of individual rights and secularism. In only western societies, and only for the last several hundred years or so out of the hundreds of thousands of years of human existence, has it been possible to live one's life without having to conform to the tenets of some religious doctrine enforced at the point of a gun. And it's only these same societies who have embraced the principle that one's life has value because one is, fundamentally, an individual with inalienable rights, rather than by virtue of being a member of some group (such as a tribe, a religious sect, the aristocracy, etc.). While America has struggled and continues to struggle to fully embrace these principles, we're the first and only country to embody them in our founding, and that, in my opinion, is amazing.

Secondly, I think economic freedom -- in particular freedom from government control over the economy -- is a pretty great thing, as well as a corollary of the individual political freedom described above.

It's not my intent to argue for those beliefs here. Rather, I'm simply noting that 1) Those are my beliefs and 2) I think our country's greatness and success have a lot to do with the extent to which it embraces those principles.

This bring me to this analysis of polling data by Lee Drutman. You can read a summary of the analysis in the second half of this column on Slate. One of the things that Drutman observes is that the traditional left/right political spectrum isn't really helpful in understanding the Trump phenomenon. As an alternative, he uses polling data about different groups of voters' attitudes on various issues to break the single left-right axis into a two axis system. In his model, the x axis represents people's views on economic issues (ranging from 'liberal' on the left side to 'conservative' on the right). The y axis represents people's views on social and moral issues, ranging from 'conservative' at the top to 'liberal' at the bottom. Here's a graphic from Drutman's report that shows how voters in the 2016 Election clustered in this model: 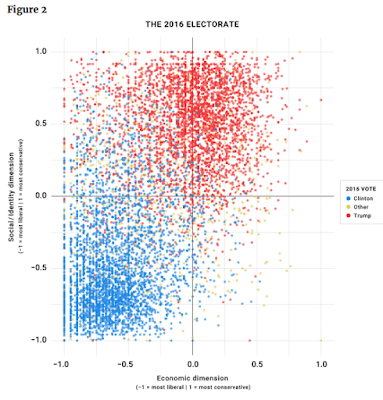 You'll notice that I put Drutman's 'liberal' and 'conservative' terminology in scare quotes in the paragraph above the graphic. I think his terminology is fine for the purposes of his analysis, but I want to talk about what the two axes really mean. When you look at the kinds of questions that go into the economic axis (the x axis), it's stuff like
This axis represents the degree to which the respondents believe it is the proper role of the government to intervene in the economy: it's a familiar paradigm with socialism, communism and economic facisim at the left, laissez faire capitalism on the right and various degrees of mixed economy in the middle.

The social axis appears like a mixed bag at first, combining questions like
In fact, I think this axis reduces to a measurement of the respondents' valuing of secularism and individualism (at least with respect to non-economic issues) vs. valuing of non-secular, Christian values and group allegiance.

At any rate, Drutman uses this model to divide the electorate into four segments based on the quadrant they fall into:
I'm used to my views being in the minority. But what's interesting and disheartening this time is that there's now a major political group whose views are, in both key dimensions, the diametric opposite of my own. This group is now ascendant, has become the second largest political faction and is on the verge of becoming the dominant faction within one of the two major parties. And all of this happened more or less in the space of an election cycle.

And this isn't just about a group whose political views differ significantly -- even very significantly -- from my own. It's not about pure disagreement or rival teams. It's about a political movement that's views on both economic freedom and secularism are antithetical to American values. While it's true (as Trump supporters are fond of pointing out) that other political figures have long advocated for and continue to advocate for parts of this worldview (the barely closeted socialism of progressives, the attempts to institute Christian morality by law of religious conservatives, etc.) there's never been a major political group whose very essence on both fronts represents a 180 degree turn away from our founding principles.

This is concerning because there are tens of millions of these folks. Had Trump lost the election, these folks would still be out there and they'll continue to be out there after he leaves office. They can't be ignored. Their most likely home -- the GOP -- certainly isn't ignoring them. How could they? They make up about half the Republican base. Moreover, as I've argued elsewhere, the more traditional Republicans who comprise the party leadership seem to think they are well-served by allying with these folks, even where they differ on concrete policy issues.

And it doesn't matter if (as I suspect) most of the Trump supporters would disagree with this characterization of them (especially, I expect, with the parts about being opposed to capitalism and the idea that their principles are un-American). What matters is what's actually operative for these folks and what their political beliefs lead to, to the extent that they're successful in furthering them. And on those fronts I think it's pretty clear where these folks are headed: more authoritarian government; a more Christian, less secular country; more government interference in the economy in the areas where they like it; and a political apparatus that is increasingly hostile to those who disagree with them.